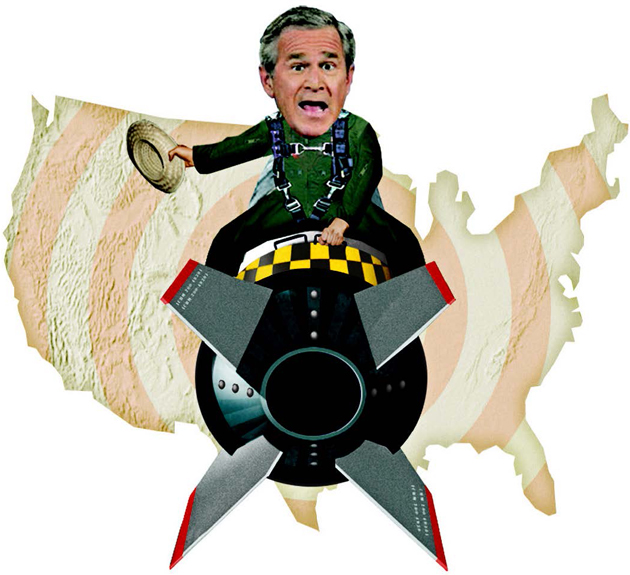 On March 20, 2003, the attacks of the international coalition against Iraq of Saddam Hussein, commonly known as the Second Gulf War, began. The clearly stated objectives were the fight against terrorism and the establishment of a democracy in Iraq (Operation Iraqi Freedom). After referring to the growing suspicion that the Saddam regime possessed weapons of mass destruction; United States under Bush’s son pledged itself as the world’s dean to invade Iraq with the help of a broad international coalition, in response to the so-called threat to American and global security.

In order to dissociate the perspectives of the conflict, it is natural to accentuate the fact that not everyone perceives or sees events in the same way.

The White House on this conflict wasn’t only half-committed, it drew up a real plan to bring Iraq out of an insurmountable crisis in view of the heavy consequences of the war.

After only a few weeks of fighting, the American flag was hoisted over Baghdad, the defeated coalition. What is this victory? What was the grail in question?

To better understand the consequences of this crisis, we must take stock of this operation to measure its effectiveness, as well as the scope of this on-the-job intervention, supported and provided for by twenty countries which aren’t still or not related to the outcomes of the conflict. In terms of relevance, it would be logical to trace the relationships of historical forces that inhabited the region in order to broaden the prism of understanding.

If Saddam Hussein’s regime was marked by his authoritarianism, all the elements come together to form a long-term dictatorial regime. The Iraqi Constitution of 1970 put all the powers in the hands of a single person, the President of the Revolutionary Command Council, who combined the powers of head of state, head of the armies, head of the executive, representing the Revolutionary Council to propose and vote laws. Above all, special attention must be paid to the geopolitical situation that put this man in power. One must report on the Iraqi situation at the time, the history making Saddam’s despotism possible are considered crucial, Pan-Arabism, anti-imperialist, secular-Muslim ideology (Baath Party), and the blossoming of the petroleum industry are all factors that have elevated him to the top, as well as the individual exception of his character, thanks to a conducive environment for his emergence.

He went from an ally to the West, the Soviets and the Third World to an imminent world threat, during the vulnerable period of transition to the new world order, the fall of the Iron Curtain, and the American hegemonic confirmation. A new approach to post-cold war international relations where the USA claims to be a justiciar of the free world, for the famous annexation of Kuwait by Iraq as a territory historically attached to Baghdad, in a local post-Iran-Iraq context, as well as heavy economic losses and the price of oil has steadily declined; Saddam needs resources, following the compelling failure to invade Iran, he risked simply annexing Kuwait for its second conventional oilfield in the world.

The source of the US-Iraq conflict can itself be trivialized by old bitterness between the Bush family (son and father) and the Hussein clan. What the First Gulf War could not finish, George Bush Junior vowed to end.

The opposing party must be mentioned as an active protagonist during this crisis. The Bush clan has viewed contemporary history with their political presence as President of the United States during the significant events of the end and the beginning of this millennium: the fall of the USSR, the first and second Gulf War, 9/11, the invasion of Iraq and Afghanistan. Aside from the proven and reprehensible use of biological weapons during the Iran-Iraq war on the Iranian population, and to the knowledge of the United States, this in no way discouraged the use of depleted uranium weapons in total contradiction to international law during the first and second Gulf War, affecting thousands of Iraqi civilians; and without provoking any international reaction.

It is important to report the “arsonist-firefighter” characteristics of contemporary conflicts, based on direct or indirect trade with hostile regimes, the contribution to the military reinforcement of them, and from this, various major conflicts erupt.

It is to be believed that these wars were a boon for the military-industrial lobbies, as was the case for that opposing Iran to Iraq (1980-1988) where the United States played a double role in the arming of these country against each other, hence the famous “Irangate” under the Reagan administration. Beyond the secret arms contracts signed during the embargoes, it has reduced the preventive prerogatives of an outbreak of violence in the Middle-East and increased the capacities of the parties taking up the conflict.

To return to the Iraqi political landscape, it must be stressed that the multi-ethnic Iraqi exception has always been a major issue in the crisis, hence the emergence of strong tensions between Shiite, Sunni, Christian and Kurdish actors due to the clan and tribal history of this territory. In contrast to multiple interests, the centralization that was intended and forced in time was doomed to fail and only widened the ethnic divide between them. Saddam Hussein is a Sunni leader (minority in Iraq), and his strong will to centralize power even as geographic divisions were accentuated, by the emergence of Kurdish independence and the almost invisibility of the Shiites in political life have contributed to the current ethnic’s division of Iraq.

The institutionalization of the Iraqi political game under the control of the Americans started a fateful turning point in the chessboard as we know it; first of all, a parallel would be due to pure chance of the dismantling of the police and the army, as was the case for Nazi Germany, which accentuates the instability and the inability to provide security to the inside territory. Secondly, a revolution of the political system was born, voted by referendum in 2005 with a broad popular approval, the “consociational” democracy, modeled on the Lebanese model, a regime based on proportional distribution according to religion or the ethnicity of political power, associated with federalism favorable to Kurdish autonomy. This plan is seen as a historic repair of the communities harmed during the Saddam dictatorship. Unfortunately, nothing foreshadowed the appropriation of this political renewal as a weapon of foreign interference as much for Iran as for the United States, which today engage in a race for influence in the Middle East, not hiding his expansionist interests of access to the Mediterranean by the oil pipelines and the other riding on a policy sometimes viewed as being even colonial.

Today, the frustration is still felt, these are generations more exasperated than ever in the face of the experience of war decade after decade. In October 2020, new general protests were born, less connoted by communitarian motivations, the protesters demonstrated against unemployment, corruption, the collapse of public services, the tutelage of Iran and demanded the “fall of the regime”. The population is made up of 60% under the age of 25, a majority having never known peace. Many of the protesters are Shiites, demanding the departure of the elite, also Shiites, whom they deem predatory and corrupt. They no longer want the confessional political system imagined by the United States in 2004 which favors the Shiite majority, oppressed under Saddam Hussein. They accuse the ruling Shia of being affiliated with Tehran and neglecting the interests of the entire Iraqi population.

History has never allowed a favorable interference in its quintessence of the local interests of populations whether it be the division of Germany post-world war between the USSR and the United States, or the Iraqi’s battlefields between Iran and the United States, where military demonstrations are still being carried out, as was the case with the recent assassination of Iranian General Qassem Soleimani by the United States, or the downing of a Ukrainian airliner ” by mistake ”with its 176 passengers whose basic target was the American embassy in Baghdad.

All these events are perplexing as to the primary aspiration of a people with all its individuals to live peacefully on their ancestral territories of Mesopotamia.