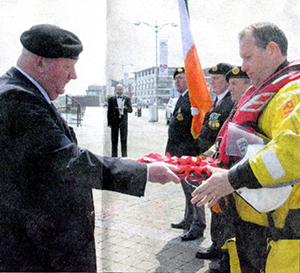 WEXFORD paid solemn tribute to its sons who fought in the Battle of Jutland on Sunday, the 100th anniversary of the only major naval battle of the Great War.

A service of Morning Prayer at St Iberius Church was followed by a ‘Centenary Act of Remembrance’ on the Quays for the people of Wexford who died in the battle, in which more than 6,000 seamen from both sides were killed.

Those taking part in the prayers and wreath ceremony at the Quays were a colour party with the national colours, the Department of Defence, Deputy Mayor Cllr Jim Moore and members of the borough council, the gardai, the Royal British Legion, members of ONE, UN veterans, the Order of Malta, the RNLI, the Coast Guard, Wexford marinewatch. Ofﬁciating clergy were Fr Aodhan Marl-ten, Canon Arthur Minion, and retired army commandant Ciaran Kavanagh. Music for the hymns was provided by the Loch Garman Band, conducted by John Clancy, while Anthony Nolan was the solo trumpet. Anthony Nolan played the Last Post, Reveille and and accompaniment to RNLI Operations Manager Nick Bowie’s recitation on the Navy Hymn on the quayside. Korean War veteran and ex-Royal Navy Tom 0’Keefe recited the RBL’s Exhortation and Dedication (The Kohima Prayer). The ship’s bell from HMS Mystic, held by the chairman of the RBL Wexford and Secretary of the RNA (Royal Naval Association), was rung by Lord Rathdonnell (ex-Royal Navy) before and after the one minute‘s silence.